Two electric vehicle HyperHubs are opening in York which aim to act as a demonstration of best practice for the design of EV charging facilities in cities. 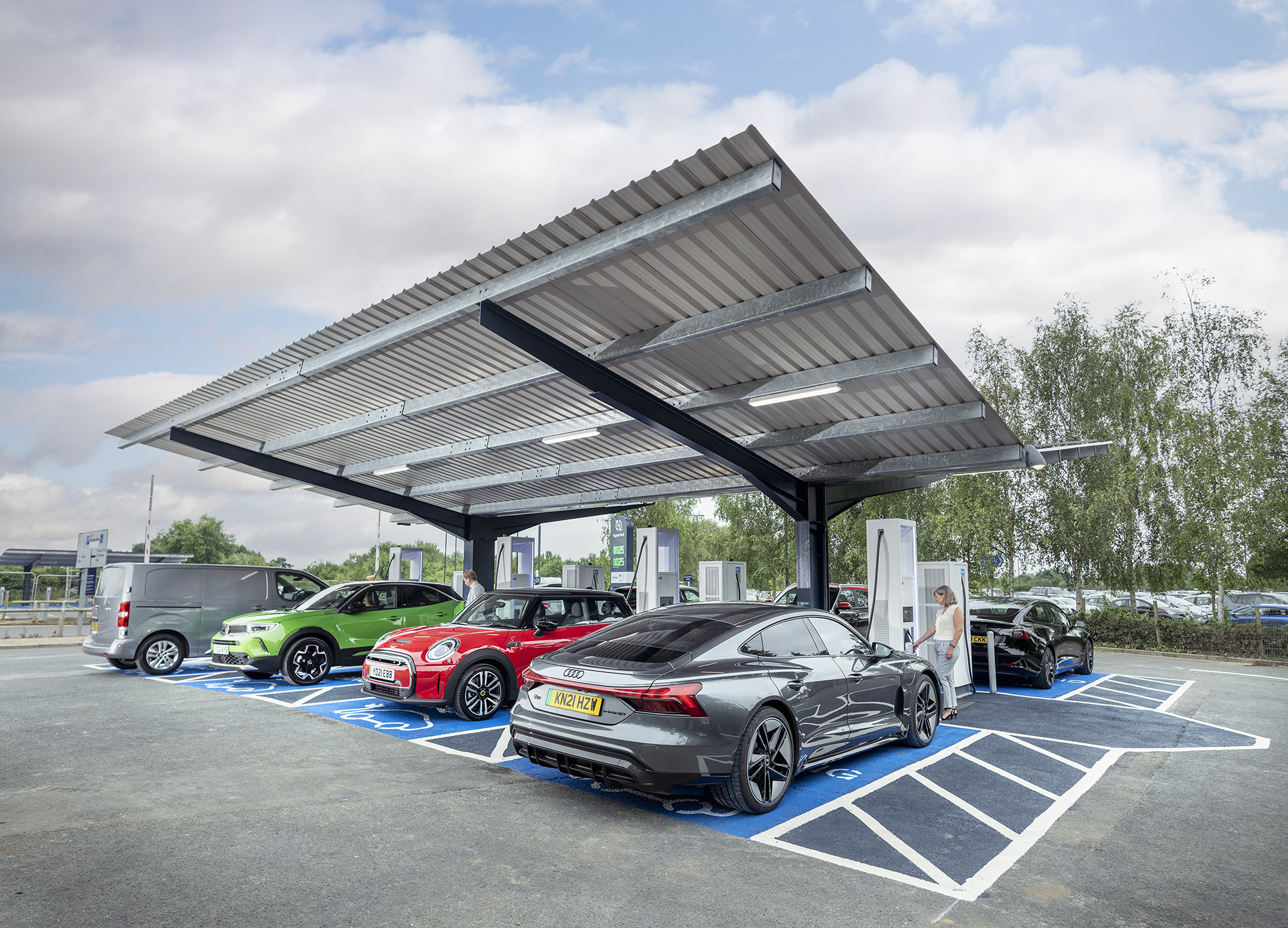 The Monks Cross HyperHub, next to one of York’s Park and Ride sites, opens today and is one of the largest EV charging hubs in Northern England. It features four 175kW ultra-rapid chargers (which can be upgraded to 350kW when more EVs can charge at this rate), four 50kW rapid chargers, with an adjacent area having thirty 7kW chargers for Park and Ride users.

The HyperHub also has a solar canopy which allows the site to generate its own renewable energy which can be stored in the Tesla Powerpack batteries at the charging hub, helping to reinforce the grid.

The ultra-rapid and rapid chargers are user-friendly for EV drivers thanks to contactless payment. Cars and vans can access the chargers, and the facility has been designed with no kerbs to allow disabled access. Protection from the weather is provided by the solar canopy and all of the electricity supplied from the National Grid will be generated by renewable sources.

In addition to the Monks Cross HyperHub, a second HyperHub is also set to open next to the Poppleton Bar Park and Ride site in the summer, and a third site is due to open near the city centre in 2022.

The unique projects are the result of a partnership between the City of York Council and EvoEnergy.

A key element behind the development of the HyperHubs was the production of an Electric Vehicle Charging Strategy by the City of York Council. This looked at a wide range of issues in order to ensure that the HyperHubs met the needs of residents, fleets, commuters and through traffic. The convenient location of the charging hubs was a central part of the strategy, with the first two HyperHub sites being located off the ring road next to established Park and Ride sites.

The Electric Vehicle Charging Strategy also identified that it wasn’t yet commercially viable for the private sector to develop such charging hubs, so the City of York Council would own its charging network in order to guarantee the best results for residents. This allows the Council to plan how the network will grow and to set tariffs, as well as making it directly accountable and enabling it to deliver next generation chargers as quickly as possible.

The funding for the HyperHubs is also unique, with the City of York Council successfully securing £1 million of European Regional Development Funding and £800,000 from the Office for Zero Emission Vehicles, along with £400,000 of the Council’s own capital funding to install the first two HyperHubs. This has resulted in 80% of the £2.2 million project being externally funded.

Cllr Keith Aspden, Leader, and Cllr Andy D’Agorne, Deputy Leader of City of York Council, comment “Our HyperHubs will allow electric vehicle drivers to charge easily and quickly using renewable energy. This will help us reduce emissions that impact on climate change and local air quality, and help us achieve our climate emergency goal of being CO2 neutral by 2030.
Top
Post Reply
1 post • Page 1 of 1