by Rob
Earlier this year, Audi announced two new PPE (Premium Platform Electric)-based EVs were in the works; the Audi A6 e-tron and the Q6 e-tron. Both would be built on the same new PPE electric architecture, which will be shared by upcoming Porsche models as well, and both will debut in sometime in 2022.

The Q6 e-tron, which will be a sporty looking SUV, was just recently caught testing, wearing camouflage. (We don’t own the spy photos but you can see them here) - viewtopic.php?f=10&t=187&p=503#p503

by Rob
The next-gen Porsche Macan and the Audi Q6 will ride on a new dedicated BEV platform called Premium Platform Electric (PPE) or ‘PPE-Architektur’ in German. Co-developed by Porsche and Audi, the PPE will underpin several future models for the two brands including the A6 e-tron and the next-gen Porsche Cayenne. 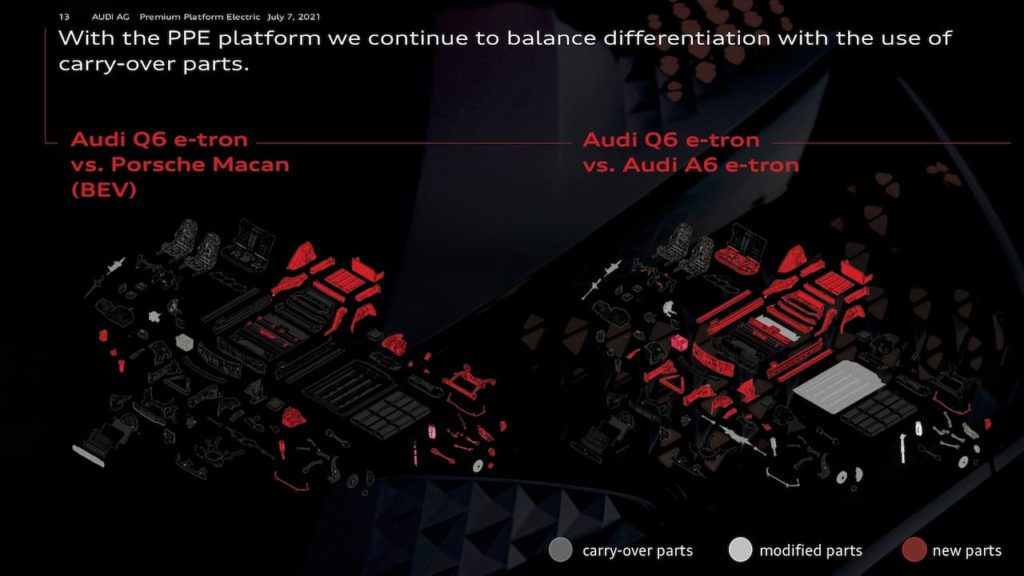 The Audi Q6 e-tron will borrow almost all the parts of the upcoming Macan Electric, and it will have a similar relationship with the A6 e-tron to a considerable extent. Image Source: Audi
Audi says that the PPE is similar to the MEB, but it allows greater performance parameters with higher output. A rear-mounted electric motor is standard, while high-end configurations can get a second electric motor (PSM or ASM) at the front axle for eAWD.

PPE platform underpinning the Audi Q6 e-tron means the model’s availability in rear-wheel drive and all-wheel drive configurations, with the latter featuring an additional motor mounted at the front. High-performance models could do the 0-100 km/h (0-62 mph) sprint in about 4 seconds.

by Rob
In total, Audi is planning to have 20 fully electric models on the market by 2025, and it intends for them to make up a third of its total sales by that point. As the PPE platform incorporates 800v electrics, like the already available Porsche Taycan, both the Q6 e-tron and electric Macan should offer 350kW rapid charging.

A range of around 300 miles can be expected, as well as a strong power output in the region of 500bhp – possibly boosted further to create an 'RS' high-performance model, in similar fashion to the standard and RS versions of the e-tron GT four-door.
All times are UTC
Page 1 of 1